Showing posts from July, 2013
Show all

Why Does the GOP Continue to Defund ACORN?

The ghost of James O'Keefe (no, he's not dead but one can dream) rears its ugly head after pretty much every House Appropriations Committee bill clears, that according to The Huffington Post's Zach Carter, who seems as confused as I am that the Republican led House likes to beat a dead horse, even after that horse is nothing more than rotting flesh and bone deteriorating into the dirt. ... language to bar ACORN from receiving any money made the final cut [in the Department of Defense Approprations bill]. Section 8097 of the bill reads, "None of the funds made available under this Act may be distributed to the Association of Community Organizations for Reform Now (ACORN) or its subsidiaries."   ACORN cannot receive any funding from the U.S. government under any legislation, of course, because ACORN does not exist. Similarly, ACORN has no subsidiaries because ACORN does not exist. GOP: Waiter, we'd like a ham and American cheese sandwich. Waiter: I
Post a Comment
Read more

July 27, 2013
A Better Bargain for the Middle Class   "... over the past couple of years in particular, Washington has taken its eye off the ball. An endless parade of distractions, political posturing and phony scandals shift focus from what needs to be done. And as Washington prepares to enter another budget debate, the stakes could not be higher. The choices we make now will determine whether or not every American has a fighting chance in the 21st century.   ... I know there are members of both parties who understand what’s at stake, and I’m open to ideas from across the political spectrum, as long as they meet the test of strengthening the prospects of hard-working families. But repealing Obamacare, gutting critical investments in our future, threatening to default on the bills this country has already racked up, or shutting down the government just because I’m for keeping it open – none of those thing add up to an economic plan. None of that will take this country where it ne
Post a Comment
Read more

McBudget Smells Worse Than a Filet-O-Fish 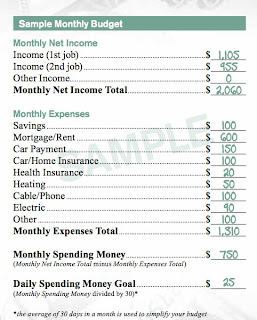 $290 per week. That's what a 40 hour per week minimum wage worker earns. Before taxes. That's $15,080 per year, provided the worker didn't miss a day of work due to illness or perhaps a vacation. $15,080. Before taxes. Yet for some reason, McDonald's decided it could "help" its employees by showing that with proper budgeting, yes, you can live on a minimum wage if you just plan appropriately. Only they pretty much proved just the opposite . Here are some of the main criticisms of it: It assumes the worker is working two jobs. It surmises that health insurance costs $20 a month. It doesn’t include child care, groceries, clothing or gas for the worker’s car. Also, another, possibly earlier, version of the budget ( seen here ) proposed that heating would cost $0 a month. And there you have it. By the second line of their sample budget , they've already assumed you are working TWO minimum wage jobs. Or about 70 hours per week; 10 hours a
1 comment
Read more

Weiner Does It Again 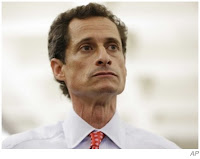 Carlos Danger? Dude, Seriously?! Anthony Weiner, former Congressman and current New York City Mayoral candidate, who has risen from the ashes like a phoenix to be a factor in the race after resigning from the House of Representatives in 2011 due to a sexting scandal, was found out in yet another cybersex peccadillo after his resignation. Yes, after.  ...C'MON, MAN! In a news conference late Tuesday afternoon, Weiner read a statement apologizing for his behavior and he repeated, as he has done since he jumped into the New York City mayoral race in May, that he and his wife, Huma Abedin, are "moving forward."  ...   Weiner opened the press conference saying, "As I have said in the past, these things that I did were wrong and hurtful to my wife and caused us to go through challenges in our marriage that extended past my resignation from Congress," adding, "I want to again say that I am very sorry to anyone who was on the receiving end of thes
1 comment
Read more

On the Occasion of My Grandson's Seventeenth Birthaday

July 21, 2013
Posted by Desert Crone I must warn you that this post is not focused on politics, which my posts usually are. Quite the contrary it is very personal; therefore, it may not interest you whatsoever. Furthermore, I'm ashamed to admit, it rambles, but I hope this post, like so many personal pieces often do, resonates with some readers at some level. The funny thing about writing is sometimes it takes me on journey that surprises me because I often end up at a place I had no intention of going. And so it is with this post.  Originally, I was going to address the adage that "all too often people will vote against their own interests."  It was my grandson who enlightened me about the psychology behind this paradoxical behavior. He wasn't sharing any knowledge he had gleaned from a text book or a teacher; his knowledge was an insight gained from observation. This post, or essay if you will, quickly took on a life of its own, and rather than try to divert its path or twi
1 comment
Read more