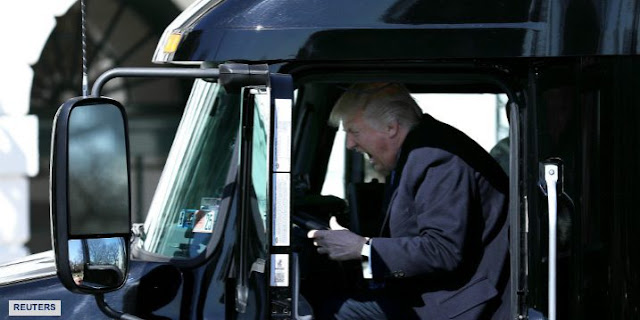 After seven years of symbolic votes to repeal the Affordable Care Act that never had a chance of passing, and campaigning to repeal Obamacare by taking advantage of their constituents’ gullibility in poisoning anything “Obama,” (many of them not cognizant of the fact that the ACA and Obamacare are the same thing ), the Republicans finally became the dog who caught the car. The shit sandwich of a bill they came up with is the American Health Care Act. It is a tax cut for the wealthy wrapped up in a thin veil of what they claim to be a new and improved health care plan (if by “health care plan” they mean the availability to purchase a worthless insurance policy that doesn’t cover anything) for the American people. Remember the not too distant past, when Republican leadership railed against the ACA being rammed down peoples’ throats under the cover of night, with no chance to read the bill, when in actuality there were 15 months of debates and over 160 Republican sponsored am
1 comment
Read more

Robert Lewis Dear Is A Terrorist

November 28, 2015
Posted by Armadillo Joe Terrorism (according to the FBI): "the unlawful use of force or violence against persons or property to intimidate or coerce a government, the civilian population, or any segment thereof, in furtherance of political or social objectives."  I can't say for certain who Robert Lewis Dear might be in his heart, nor what he might think or truly believe nor can I really know how he got there, though I can guess. Fact is, I don't care. Robert Lewis Dear is a terrorist. The undisputed facts are that he is white and male and had easy access to large, powerful guns with which he sought to impose the death penalty on women exercising their legal right to control the reproductive functions of their own bodies, the skilled personnel providing the services that facilitate that exercise and a sworn officer of the law who fulfilled his duty to protect that exercise. He was also subsequently captured alive by the constabulary. I could not help but notice
Post a Comment
Read more

August 16, 2015
But here is the irony, here’s the thing that all the angry Black people know, and no calmly debating White people want to admit: The entire discussion of race in America centers around the protection of White feelings.  From I Don't Discuss Racism with White People by John Metta.  I've been working on this post for a couple of weeks now, ever since I read John Metta's piece, which I thought was spot on. As I so often do when I'm writing, I struggled with this piece and would put it aside for a day or two. I discussed my observations with friends, both black and white, because I needed their feedback. Finally, because of events that occurred this last week, my thoughts really crystalized, and I was able to finish. My words will certainly make some angry and defensive, which isn't my purpose but is always a byproduct of a piece like this. My hope is some will have an "aha moment," a moment of clarity about our role, or if we even have one, in the Black L
15 comments
Read more

June 18, 2015
To my Twitter & Facebook friends. If you're posting kitty & puppy videos instead of denouncing racism & your racist friends & family on Facebook, you're no better. If you don't have the guts to stand up to racists around you, you are a pathetic enabler of the hate in this country. If you support a Republican then you support  systemic racism & the oppression of People of Color. If you deny that, I call bullshit on you. And I'll call you worse.  Shame on you for enabling the ugly hate in this country. If you say you want your country back, fuck you. This hate you see is your fucking country. And don't you dare say Pres Obama is divisive. No, it's you! You are divisive because you allow the hate to grow & you look the other way. Then you preach God's love & Jesus this and that. Fuck you. Just fuck you. If I've offended you, you need to be offended.  You offend me.
Post a Comment
Read more

Hello. My name is JoPat Wellman aka Maria Meanmuthafukah, @desertcronenm, and currently@jaypeaXX on twitter. I am a 67-year-old wife of 44 years, mother of two, and grandmother of four. As long as I've been interested in politics (at least 50 years), I've been a liberal--not a scared, wimpy liberal but an in-your-face-I-don't-care-if-you-like-it liberal. In 1972 I proudly voted in my first presidential election at the age of 24 for George McGovern. Back in those days I admired many Republicans, Everett Dirkson, Gerald Ford, Bob Dole, and of course, Dwight D. Eisenhower. I liked them because I sensed they cared about America but more importantly, Americans. I eventually graduated with B.A. and M.A. degrees in English, married the love of my life, and became a junior and senior high teacher and college instructor. We raised two daughters with the same liberal values we have.  I was born in Albuquerque and raised in New Mexico, the third of five generations to be born and re
Post a Comment
Read more

April 25, 2015
I've never seen a Democrat fundraise off a sitting President before, especially one who has distorted facts as blatantly and dishonestly as Warren has. Just mind boggling to me especially since congress is continually being briefed and given summaries. Then when pressed Warren admits she has seen summaries, but she can't talk about it. Really? All she's been doing is talking about it. And yet people are quoting her, saying no one can talk about it. How can you miss the irony? This is what makes want a cigarette. Liberals accuse conservatives of being averse to facts, but then they go off deep end whenever one of our own prophets of doom starts fear mongering. If Warren or Sanders says it, it must be true so why do any research. Sanders has been dead wrong plenty of times, but liberals still light their hair on fire and each other's hair on fire every time he tells us the sky is falling. This is the same crowd, mostly white, who is declaring AG Holder didn't ac
1 comment
Read more

LAPD Cops Shot Ezell Ford in the Back, Autopsy Finds Ford, who suffered from mental illness, was shot three times, including one fatal blast to his back, which left a muzzle imprint, an autopsy concludes. BY: BREANNA EDWARDS Posted: Dec. 30 2014 12:45 PM

Don't ever tell me that there isn't a pattern here. Don't ever tell me that this isn't racism. Don't ever tell me we are all equal in this country. Don't ever tell me all lives matter in this country because black lives do not matter. Just shut up if you have some stupid white person platitude because I'm sick of hearing that bullshit. LAPD Cops Shot Ezell Ford in the Back, Autopsy Finds Ford, who suffered from mental illness, was shot three times, including one fatal blast to his back, which left a muzzle imprint, an autopsy concludes.  BY:  BREANNA EDWARDS Posted:  Dec. 30 2014 12:45 PM  An autopsy released by the Los Angeles Police Department details that Ezell Ford, the mentally ill 25-year-old who was killed by police Aug. 11, was shot three times, including once in the back, KABC reports. Two days after Michael Brown’s shooting death, Los Angeles police officers were attempting to restrain Ford, who family members said suf
Post a Comment
Read more
More posts